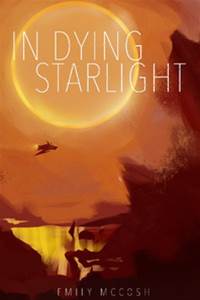 A rogue cyborg. A talking badger.

Aaron is perfectly content to chase bounties in his run-down little space ship, avoid human interaction at all cost, and lay low from the cyborg planet that created him. But when he and Bat—his half-robotic badger companion (who talks just a little too much)—chase their largest bounty ever, they run head-first into not only some dangerous criminals, but other cyborgs much stronger than them, and worst of all, a handful of humans who aren’t going anywhere.

What you can expect from In Dying Starlight:

- A stubborn MC in over his head and trying to survive

- An atrocious amount of sarcasm and snark

- A tiny bit of romance a ways into the story