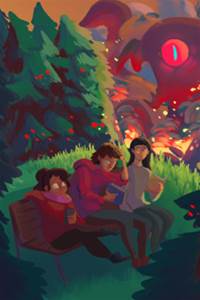 At the world’s top college of magic and technology, every day brings a new discovery -and a new disaster. The advanced experiments of the college students tend to be both ambitious and apocalyptic, with the end of the world only prevented by a mysterious time loop, and a small handful of students who retain their memories.
Freshman Vell Harlan, the newest student to get caught in the loop, now has to deal with stopping the apocalypse on a daily basis on top of having to study for exams- but he takes every doomsday in stride. While the dragons, gun-wielding octopi, and alien tourists are new, this isn’t Vell’s first brush with death and resurrection...
Updates Tuesdays and Fridays