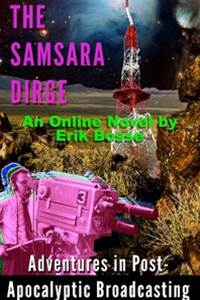 It was not the apocalypse anyone expected. They called it the Changes. (Which might sound boring, though it was no such thing!) During this time, reality itself was suspended. Anything could happen, and often did. Who could have anticipated flying turtles, lighter than air futons, the appearance of the color slurkle, or the eradication of differential calculus?

After a year and a half of such wonders, it all stopped. The world was not the same, nor the people in it. Why had it happened and how did it end? Would it return? No one knew.

Silverio Moreno, irrepressibly optimistic host of one of the most popular post-apocalyptic gameshows, wants answers. And the truth might just bring in his highest ratings yet!