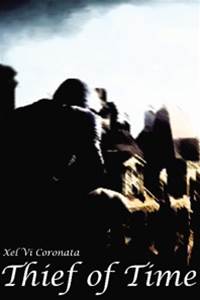 Book 1: The Legend of Tot

Claud Primus, a self-declared master thief, has a simple goal. To live forever. It's a rather easy task, for miraculous objects called lifestones are able to extend one's lifespan. These lifestones are best found in the treasuries of nobles, lovely resorts that Claud pays a visit to every so often. Unfortunately, one of those nightly visits go awry, and Claud is forced to escape with just a single lifestone and a box in hand.

Normally, that's when things die down. The guards yawn, the gates close, and the night continues.

But this time, the night isn't that forgiving. A dozen schemes result in the murder of someone important, and with a convenient scapegoat — Claud — at hand, it doesn't take long for him to be framed as a heinous criminal, wanted for the indirect murder of someone high up...and it just gets worse from there.

As ordered chaos sweeps across Licencia, Claud leaves for Julan Barony, intent on making some profits there. Accompanied by the erstwhile heiress of Julan, a fellow member of the Moon Lords, the two plot against the barony's wealth...as well as a promise to bring about its downfall. Meanwhile, back home, the Moon Lords have busied themselves with digesting their gains. Eyes, however, are beginning to turn to this proverbial fish in a small pond.

The fishermen are coming.

When they cast their hook, what will Dia and the others do?

Book 3: Murders under the Moons

In the sleepy town of Nachtville, where Claud and Lily are forced to stop at, a set of nasty murders occurs. Victims scream out in fright, before a spear falls from the sky to end their suffering. Cowed and cautious, the master thief and his partner slink in the shadows, their objective that of home...

A new task, however, has fallen on Dia. With a trusty helper at her side, she has to set off towards Nachtville itself, to solve the mystery Claud had abandoned. Faced with an enemy whose sole skillset is geared towards killing, how will they succeed?

And what dark secrets will they find?

Book 4: In the Dark of the Moons

The year has ended. The four months of the full moons will soon be followed by two months of the new moons. Duke Istrel's ascension is around the corner.

Amidst this political upheaval, Count Nightfall, Licencia's strongest defender, has been called away. The Moon Lords' largest task yet — to protect Licencia in the absence of its ruler — has begun. And yet, trouble is unrelenting. A distinguished personage, one that Claud fears, has been found dead in the county, his brains dug out and his body disemboweled. The inquisitors of the White Church have been dispatched to investigate and apprehend the murderer...as well as the person behind this puppet.

Tormented by a call to fight, Claud directs his eyes out of the city, looking for the puppetmaster. Skulking in the shadows, the master thief will soon confront his greatest foe yet.

Synopsis: A new era has begun. For the privileged, the sands of time dribble away for every passing moment, counting down to the arrival of a entity of mythical proportions. The night now harbours shadows and fog, and operatives of the Moons and the Dark clash in shadow. Claud, as usual, is investigating a spate of nasty disappearances in the city, but little does he know what these disappearances truly mean.

And yet, a tide is coming. When it finally breaks, what will he do?

Synopsis: The person behind a strike that would enter the annals of history flees his home, bringing with him the person closest to his heart into a new land and into a new world. Having left Istrel for the first time in his life, the two of them attempt to settle down in foreign lands, only to be caught in the middle of hostilities between two mighty powers grappling for dominion.

Yet, none of that has anything to do with him. Following his desires, Claud eventually makes his way to the fabled Celestia Ruins, a fragment of another world. Bearing witness to truths he cannot yet comprehend, he returns from his exploration, a small break away from the machinations of destiny. One thing, however, is for certain.

Destiny will not wait for him.

Synopsis: Destiny churns on, heedless of mortal machinations, and Claud watches as the battlegrounds between the Moons and the Dark are drawn up. With the forces of the great Dark occupying Lostfon, Claud comes to a startling realisation — that he may have very well be a murderer of heinous proportions. Grappling with that realisation, he struggles to prepare for his Second Tutorial...

Back in Istrel, Dia finds herself confronted with a perennial truth. Even in a time of writhing destiny, the machinations between nobles never cease to end — and unfortunately for her, the group once known as the Moon Lords are forced into dealing with a petty squabble between two counts. What they didn't account for, however, was the startling discovery they would soon make...

And the shadow of the Red God's Holy Son behind it all.

Synopsis: Nightmares haunt the horizon as Claud sinks and awakens from a seeming dream. What was once illusory begins to play out before him, in a way he cannot imagine. Dia, forced to wield arms, begins and ends a battle that opens her eyes to the vast dangers that lurk in this sundered world. Under the banner of humanity and divinity, she beholds the silent, forgotten protectors of Orb...but there is no forgetting the battle between the divinities.

The Dark descends, the Moons writhe, and the horns of war blow once more.

But this is not their battle.

Synopsis: As more and more events fall into place, Claud finds himself desperate. Not for himself, but for the person who has turned into his world. Armed with the knowledge of a certain future, he approaches the only person that could possibly help him in his time of need, trading information for a promise of help. With that as solace, he returns to the grim task of understanding and seeking, revisiting an ancient, shattered fragment of another world...unleashing changes that he never knew was possible.

Back in Istrel, Dia and the others must now navigate around a familiar spirit, who seeks to investigate the death of his master's Bearer. With them as prime suspects, the Seekers of Life must move carefully...but the Coloured Gods are not the only divinities eyeing them closely. The Moons, bristling from repeated defeats, are looking for new recruits, and the Seekers of Life are prime cannon fodder.

Above all, destiny marches on, the unfeeling clock a warning to all.

The Trial of Aeons will soon arrive.

Release frequency: one every few days or something, I guess.